From London, I headed up to Oxford and spent 5 days living with members of the Oxford University Cross Country Club. Two of the guys are PhD students from England, and one is a Rhodes Scholar who ran at Haverford College. They were really helpful and welcoming (not to mention intelligent), and made great tour guides of the city, trails and university.

I had the luxury of seeing the Iffley Road Track every time I stepped out the door, and secretly hoped every man I passed was Bannister himself (as far as I know, none were).

I also had a few great runs in the unforgivingly hilly Shotover Park, where Oxford trains and hosts cross country meets, and along the river path, which was full of narrow houseboats, punting students, sunbathing swans, and bearded fishermen.

One of my housemates, Andrew, walked me through a number of the Oxford colleges and gave me the insider’s tour. He showed me the college where J.R.R. Tolkein wrote The Lord of the Rings, the river where Lewis Carroll created a story about the dean’s daughter that became Alice in Wonderland, the gargoyles that inspired C.S. Lewis’ Chronicles of Narnia, the staircase and commons seen in Harry Potter, and the college where 5 kings and a slew of other influential people lived and studied.

The colleges are gorgeous- many of them dating back to the 13th century- and like little self-sustaining villages. Each one has immaculate lawns, professionally manicured gardens, massive fields (one with a pack of deer- I knew Martel was missing something!), student dorms, great halls, ancient libraries, and chapels that would draw almost anyone in for a church service or evening song performance. Although the Rice colleges aren’t as elaborate (to say the least), it was really cool to see one of the predecessors of our college system and the origin of so much groundbreaking work.

I also found one of my new favorite towns when I took a day trip to Stratford-upon-Avon. It was everything I imagined and hoped for: cobblestone streets, gingerbread-type houses, tons of used bookstores, wild gardens, and meandering dirt paths. I strutted past Shakespeare’s houses and Anne Hathaway’s cottage, and rambled down as many small streets as I could.

After a long trudge with my belongings and lots of public transportation (4 trains, 1 ferry and 1 bus), I’ll step foot in Dublin tonight and will spend the next 2 weeks in Ireland. I’m first passing through Clare County, where some distant relatives live on a sixth generation farm, and then making my way up to Donegal, where some of my London friends grew up and ran. I have plans to train with their club (Finn Valley), meet with the Irish national coach, and experience the rain, mud, and chill that characterize running in Ireland. 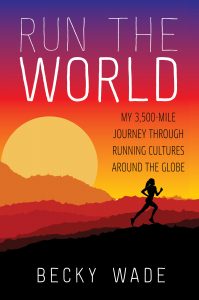 For the first time since 2008, I’m not competing

When the setup is harder than the exercise itself.

With our first snow in early September and latest

I’ve got to hand it to them: my siblings have ex

Mamas make the 🌎 go round. Wishing a very happy

Seconds? Don’t mind if I do! 💉 Beyond ready